The 2020 Nanaimo Ukulele Festival has been cancelled, see you in 2021 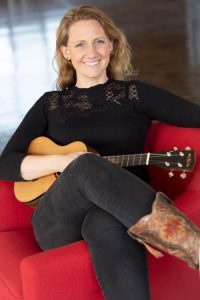 With a passion for songwriting, Victoria Vox began writing songs when she was ten. She furthered her music education at the Berklee College of Music, as a vocal principle with an emphasis in Songwriting. A few years after graduating, Vox took up the ukulele. Her music style shifted to chanson tinged with jazz, which, over the years, has settled in nicely with her pop songwriting flair. With 10 albums under her belt (as an unsigned artist), Victoria continues to grow and hone her craft. She’s very personable on stage, though a bit shy at times, she’s goofy and engaging, and likes to make people laugh. But as soon as she opens her mouth to sing, the emotion and inspiration pour out of her melodic and cleverly written songs, and it becomes undeniable that she is genuine and full of heart.

On a lighter note, she also has perfected the Mouth-Trumpet which, to some, is considered a form of “beat-boxing”. Vox takes improvisational solos echoing the tones of trumpet genius, Chet Baker, solely with her voice. This odd and quirky talent, nonetheless, landed her on the Jay Leno Show (2009) and on the front page of the Wall Street Journal (2015).

Her 10th album, Colorful Heart, is consistently eclectic, as her previous albums, however, a new sound is achieved in her songwriting. Anything is possible with a ukulele, and Victoria Vox is proof. 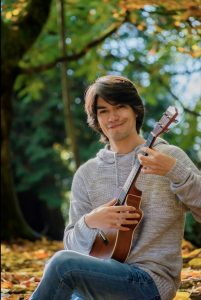 Eduardo is a multi-instrumentalist originally from Mexico currently residing in Vancouver, Canada. On his journey, he studied and played music in a large variety of environments, worlds, and languages. Being both classically and traditionally trained, he soon got active in a wide diversity of music projects in Mexico, teaching, performing and writing music.

Eduardo played several different traditional string instruments with ‘Amate’, a traditional mariachi based in Guadalajara, that performs regularly inside and outside of Mexico. Parallel to that, he played the cello on the ‘Victor Manuel Medeles’ chamber orchestra, of which he was also the arranger/composer of almost all of their repertoire, and the repertoire of other choirs and ensembles in Mexico. During 2017, he collaborated on the book ‘Tsenten Ajab’, a book of studies and arrangements of both traditional and modern music for the Jarana Huasteca, a traditional folk instrument from Mexico’s Huasteco region that was published in 2018.

He was the founder/director of the Academia de Ukuleles de la Ribera (Lakeside Ukulele Academy), a self-financed music school that provides instruments and free music lessons to all children in his community.

When the workshops have finished, we’ll take a short break to set-up the stage for the Open Mic and Sing and Strum

Show off your chops at the open mic or “4 minute mic”.  Sing and strum along with the band, and join us for a fun afternoon. Bring your friends.  No ukulele experience needed for a great time.  Lots of great door prizes too. 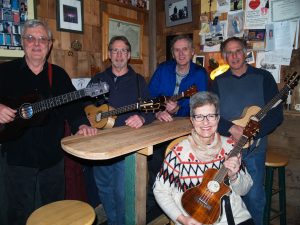 The Revolving Doors comprised of Bill Naylor, Ade Barnum, Dean Williams, and Liz DeBarros will give a short performance and then lead the “Sing and Strum”. The band is based in Errington and has been playing together since 2014 and regularly perform at the Errington Farmers market in the summer, and at various private parties and dances in their locale. They’ll be leaving the electric guitars and drum kit at home for the Festival.

Concert tickets and workshop registration will be available at the March 22nd Sing & Strum event at The Neighbourhood Church, Nanaimo 2.00pm – 4.00pm. Anyone purchasing tickets at this event will also receive a free “Nanaimo Ukulele Festival” bag.

Click on the arrow below to purchase concert or workshop tickets. Tickets will go on sale  online on March 23rd at 10:00 a.m.

If you order tickets online, your PayPal invoice is confirmation of your Registration. No tickets will be mailed out, you can pick up your tickets at the Registration desk at the Festival on Friday evening for the concert and Saturday morning/afternoon for Workshop folders

Links to our favourite ukulele websites

PDF Minstrel for tons of tabs for the ukulele. Lots of classical arrangements and links to many, many other uke sites.
https://pdfminstrel.wordpress.com/