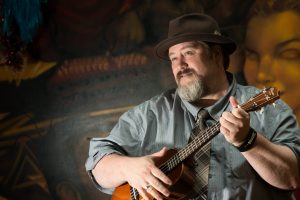 Canadian blues artist Manitoba Hal is a ukulele master and singer-songwriter. He is known for his expressive voice and mastery of his instrument; his trusty baritone ukulele; Manitoba Hal takes his audience from the deep south to the islands with songs that are mournful, hopeful, silly, romantic and introspective. His original songs have become modern classics and his take on standards and popular blues songs of the past have brought him to festival stages worldwide.

He began his career as a guitarist but began to play the ukulele when he inherited a 1955 Martin uke from his beloved grandfather who told him “you can have it if you learn to play it”. And so, he did, continuing to master the tiny instrument, proving that the ukulele can be small but mighty as he pulls out powerful riffs and melodies adding background beats with looping technology showcasing the blues in all its passion and groove. 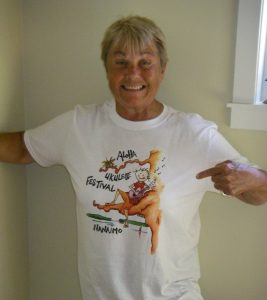 Carol started playing the ukulele in 2011 with the Harbour City Seniors Nordli group. She has been involved in organizing the ukulele festivals in Nanaimo since 2014. Carol plays the tenor and baritone ukulele and plays and performs regularly with the Folk ‘n Oldies group where she is the musical director. Carol also mentors two Ukulele in the Classroom groups with the Nanaimo seniors program. She is a Certified Level 3  James Hill Ukulele Initiative (JHUI) ukulele teacher.

Links to our favourite ukulele websites

PDF Minstrel for tons of tabs for the ukulele. Lots of classical arrangements and links to many, many other uke sites.
https://pdfminstrel.wordpress.com/